The short of it: Mudita Pure is a work in progress that I cannot recommend. Originally, I was much more optimistic and intended to continue using it as my daily driver, despite its flaws. Halfway through my second week of use, its lack of signal strength made it a non-option.

Background
Since the end of 2017–at the crossroads of my destructive dependency on technology and the financial burden that came with it–I have been working to reduce my digital footprint.

Transitioning from smart phones has been a significant part of that. Conceptually, I found this relatively easy: I’ve always been a bit on the fringe when it came to mobile communication. It wasn’t until grad school (2010) that I got my first real handset (an unidentified LG Android on Virgin Mobile). And since then, it’s been dalliances with Windows Phone/Mobile, unlocked Androids, third and fourth tier service providers (read: “inexpensive” — in the US this means T-Mobile and T-Mobile/Sprint MVNOs), and the cheapest buy-ins to the Apple ecosystem.

So when my aforementioned life shift hit almost five years ago, pushing it just a bit further felt trivial. Tired of a phone bill of $60(USD) a month (cheaper than average, mind you, for Unlimited Talk, Text, and Data) for services I was starting to abandon, I began to push for more simple devices and more restrictive cell providers.

Flash forward to 2022, where I sit with two SIMs on a T-Mobile MVNO–each commanding no more than $7(USD)/mo for adequate talk, text, and data. At least…adequate by the numbers.

If you’ve never used an MVNO in the US, good for you. I can’t seriously and uniformly pan them, of course: for a lot of people, these low-cost life-lines are the difference between ‘have’ and ‘have-not.’ These are the services with surmountable barriers that make or break the important things: getting jobs, submitting applications to schools, turning in class assignments, and calling for help in an emergency.

That said, you get what you pay for: MVNOs make it clear on no uncertain terms that you are merely a guest on a larger corporation’s network. You’re treated to a portion of the coverage at a fraction of the speed of what the main carrier -could- provide, and you’re told that–push come to shove–your data will take a back seat to the people paying full fare.

And this is where my review takes an unexpected turn. If any of you have followed this thread, you’ll notice I was using the forum as an active template for a review, and about two weeks ago, stopped at the break point above.

I wanted to compare Mudita Pure to the devices in my life that came before it. Point out the hardware and software flaws, and the improvements that were being made with software updates. But I’ll leave the details on (some of) the troubles I’ve been having in these threads:

Since about noon EST yesterday, the Pure is no longer auto locking despite still being set for 1 minute autolock. It will remain on the active screen indefinitely. Relevant data should still be in the ZIP file I sent last evening: ***@polycarb.love - OS1.2.0

Hey team. Had this instance on my first full day of use: a mass text sent by GrubHub the night before, was only received at around 8:10 this morning. When it did arrive, it interjected into the text thread I had open at that moment. It seems to permanently live there now. [image]

I’ve had this occur twice, typically around 7 to 8 PM after arriving home from work. Because it happens sporadically, I may have the events slightly confused but to my recollection: First instance: Noticing I hadn’t received any messages for a about an hour, I saw I had lost cell connection. I did as @Jose_Briones often describes and reset the SIM connection. This is a common thing to do on Pure (though less so with the new update) and can be performed a number of ways: The hardware slider, sw…

But these issues aren’t what changed my mind on Pure. Unfortunately, my second and third weeks with the device have been abysmal. Despite software improvements, the combination of weak signal and MVNO band support in the US (plus the sub-part MVNO service experience I’ve been having lately–no fault of Mudita’s) have made Pure all but unuseable.

A bit dramatic, yes, but after 7 years of trying to find the best minimal phone experience on an inexpensive network, I’ve missed too many critical calls–namely from my partner–which have essentially left me unavailable in emergencies. The wind has been officially taken out of my sails.

I am fortunate enough to have the means to make my next move: transition to a more expensive carrier using a smart handset with radios that I -know- work in the US. It’s not what I want, but the market and the trends have too much momentum in this country. And while Mudita Pure was a premium device, I was hoping it’d be the kind of thing that would usher in a new era by providing an example of what a simple phone could do on a “modern” US network. I was hoping it would be a rising tide that would lift all ships badged Nokia, Alcatel, etc., improving the options for people who financially rely on the MVNOs. [As an aside: Mudita never aimed to be that, so it’s not fair to hoist that on them…but a man can dream.]

In the end I say this: Your mileage my vary with Mudita Pure: and I’m definitely guessing you’ll go further in other parts of the world.

The product is beautifully designed and constructed (if a bit creaky–see the button tolerances below). There’s brilliance in the hardware (Did you know the flashlight IS the flashlight button? This is smart because you can activate it while it’s still in its case). Its display sings in the sun. And I give Mudita credit for iterating on the software and showing marked improvements. 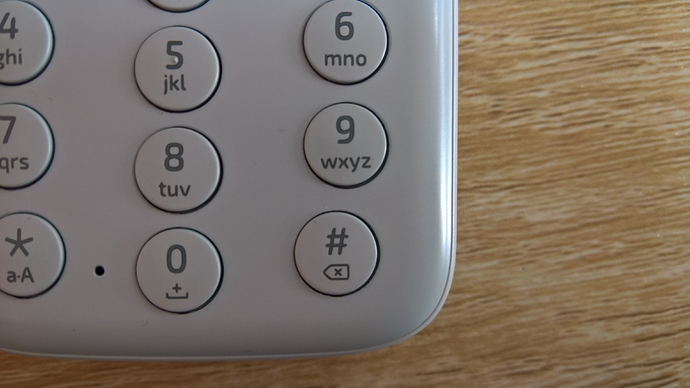 I’d say, if you’re in the US–and you don’t mind the bumps in the road–keep your pre-order, but keep your old phone on you just in case. New buyers? Hold off.

I like the green- and red-stripe buttons! Until I saw this photo, I thought that all buttons had only white light.

Thanks for the updated review. The issues are also present on Flagship carriers so it’s not just MVNOs. One day though…

Definitely. You’ve had a lot more experience on that front but have chronicled it well. Thanks for that, too.

P.S. Switching to ATT has been a nightmare

I bought mine last night, but I live here in Canada. Does not seem to be any of these issues here. Phone signal would definitely be a deal breaker for me. But from the feedback I have read online, the phone seems to work on all of the major networks in Canada

It works, but the SMS is still an issue for me. Signal in regions is not great. If you stay in a metropolitan area it’s no biggie but you can’t count on it on road trips.

And if you’re in a basement, it probably won’t work.

So it depends on your lifestyle, situation. For me I live close to towers and I mostly work from home on the 2nd floor. I get just 2-3 bars but it’s good enough to receive and place calls.

What provider are you with? I am with public mobile

Bell! I think you may struggle with Public Mobile, I was with them years ago and they were awful

I’m not worried. I used the light phone 2, punkt, and unihertz pocket allon public mobile with zero issues. Publicmobile uses tells towards so I think I am good to go

the light phone 2, punkt, and unihertz pocket allon public mobile with zero issues. Publicmobile uses tells towards so I think I am good to go

I’m just telling you, the Mudita is a different beast than those other phones, because aside from being minimalist in nature, it’s also built with the low-SAR philosophy (which is what I like most about it) but that also comes with the tradeoff of getting lower signal strength than other phones.

You may very well be fine, just something to keep in mind.

I think that would go against the base concept behind the phone.

If a phone with higher SAR replaced the low-SAR one, I would agree that it would go against the base concept. However, Mudita could decide to give this choice to potential buyers and offer version with higher SAR but better signal / connectivity.

As someone who doesn’t care about low SAR at all, but would love a version of the Mudita that actually works in my country, I second this suggestion!

From the sales page for Pure:

With the user’s health in mind, Pure always chooses the lowest spectrum available to limit radiation.

I don’t know what “the lowest spectrum” means on the sales page.

@urszula: Can the Pure designers address the concept of letting users select something other than “the lowest spectrum”?

@kirkmahoneyphd This is an interesting idea. I will pass it on & see if it can be implemented.