SSH on a feature phone with a hardware keyboard [Done it]

This post is inspired by the quite popular discussion about a simple writing device/word processor. In fact, it might also be an answer to that problem. However, I gathered SSH deserves a topic well on its own.

Please, allow me to introduce you to my current daily driver: 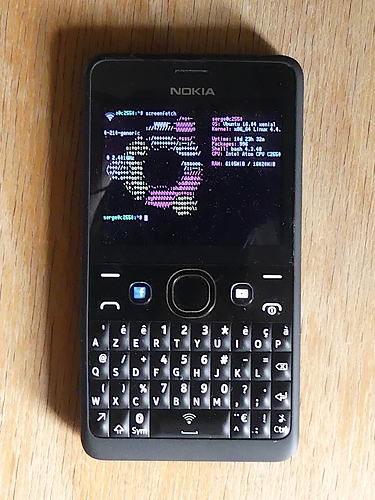 It is a Nokia Asha 210, 2.5G feature phone with a hardware keyboard running the Series 40 operating system. It was launched in May 2013; so it is now 8 years old. It can still remain over 20 days in standby on a single charge of its original 1200 mAh replaceable battery (new out of the box an impressive 46 days!). The screen cover got cracked once, but that was quickly replaced with an identical aftermarket shell.

With a single press on the space bar, one can quickly connect to 2.4 GHz WLAN. It has a 3.5 mm jack, an FM receiver, a media player and with the right software, it can even stream Internet radio.

I ended up on the Mudita forum looking for a privacy respecting 4G replacement for this phone. As a matter of fact, 2G has started to “sunset” in a number of countries over the world and I fear more are to come.

Now, what is so special about the phone depicted above? Well, I installed the open-source secure shell (SSH) client and VT100 terminal emulator MidpSSH on it. This allows me to establish an encrypted connection from wherever I happen to be, to my always-on, low-power Ubuntu headless server using private-shared key authentication.

SSH gives me the command prompt, the computing power and the fast Internet connection of that server at the tips of my ageing little feature phone. I can literally execute any text command or ncurses text application on the server and interact with it and see the results on my feature phone. This includes detailed weather forecasts (see below), calendars, reminders, shopping lists, text processors, text web browsers, etc.

And the good news is: SSH hardly consumes any data; only a few tens of kilobyte for a whole afternoon of non-stop consulting my shopping list on a shopping spree. If I do not call and only SSH, I can produce a monthly phone bill of a mere €0.50; leaving me more money, not to shop, but to buy healthy food! SSH is kept alive with almost no data traffic.

This finally brings us back to the simple writing device/word processor for Mudita phones. The choice of a favourite text processor is something very personal. There is not for nothing a raging “editor war” between Emacs and Vim. (I am in the latter camp ;- )

This is why I feel that MuditoOS should come with an SSH (or mosh) client and VT100 terminal emulator. It would open the device to a vast array of text applications in the privacy of your own server (or perhaps as a Mudita server service).

However, who thinks “text” also says “keyboard.” A T9 keyboard is wholly impractical for interacting with terminal applications. Perhaps one could connect a small keyboard to the USB C port of the Mudita Pure phone, but that would still be cumbersome to carry along. Moreover, the narrow screen form factor of the Mudita Pure is not well suited to mainly horizontal text applications.

I guess what I am really advocating for, is a Mudita sibling phone with a horizontal screen, a small full keyboard below this screen and, yes, on-off switchable WiFi. Such a phone would be a tad larger, but could therefore also house a larger battery. Two Li-ion 18650 or 26650 cells on the screen side would give the keyboard and screen a nice inclination.

If the screen were of colour and with sufficient resolution, it would even be possible to launch graphical applications (like a full fledged web browser) on the server. Through a process called X11 forwarding over SSH one could interact with graphical applications from a dumb, SSH client phone. All the heavy lifting (memory, Internet traffic, screen composition) would happen on the server. I tried that; not on my feature phone, but with a desktop located 200 km away. It works absolutely fine. Of course, do not expect to watch any video over this.

Well, there you have it, my dream device…
Yes, in a sense back to the old days of client server computing, but then mobile.
Feel free to comment.

8 Likes
Why do so many potential backers want the Pure to work like a smartphone?
A simple writing device/word processor
What Type of Accessories?
elizabeth July 28, 2021, 8:09pm #2

Interesting. Would this work on my Nokia Asha 300 since it uses S40 too?

ASCII art on such a small screen, I don’t know about that ?