The Internet: "Passing Fad" or here to stay?

On December 5th 2000, Daily Mail ran this article. It did not age well 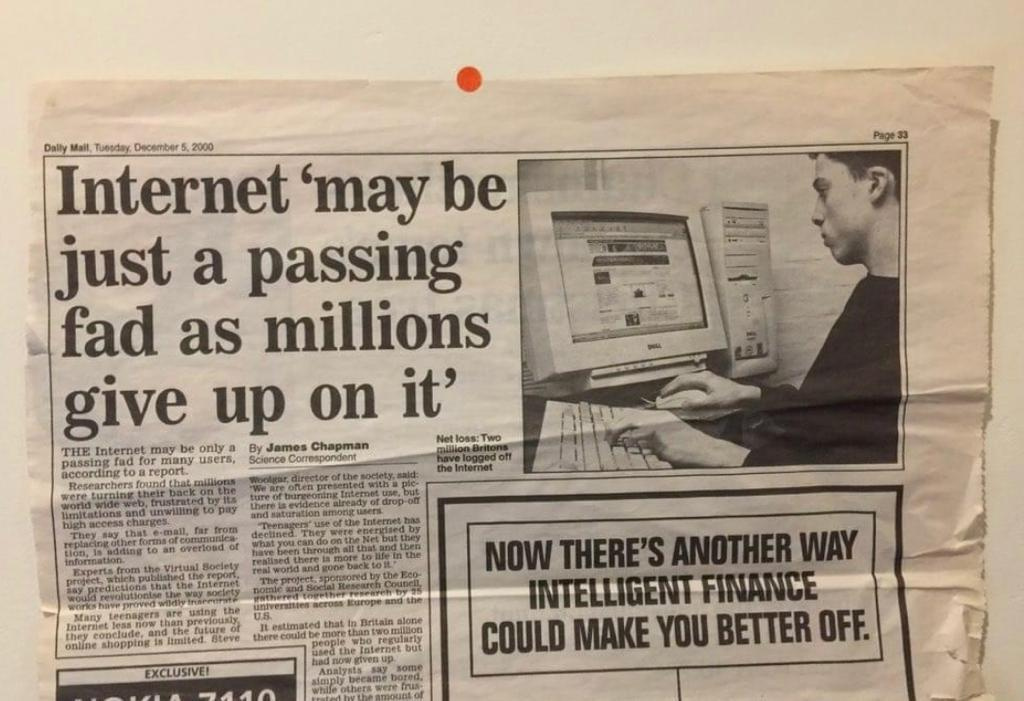 image1024×701 148 KB
I’d like to use this thread to discuss your relationship with the internet. Did you always knew it would become as prevalent as it has? Has your usage of the internet changed in recent years? Or has it always been somewhat average or perhaps you’ve just recently made a conscious decision to unplug after being “extremely connected” for the last several years.
Personally, I’ve always been a “moderate” user, logging in for work and other purpose-driven activities. I was never one of those people who scrolled the internet until oblivion.

The internet is a fantastic and powerful entity. There was much talk early on of what the world would look like as a “global village…” While many optimist were focused what value connecting the world would be, there weren’t many in the groupthink engine who would foresee the horrors of the spread of disinformation among an uneducated populous.

Much of my time during my teen years in the late 90’s was spent on newsgroups and IRC channels. Chatting with friends over ICQ and AIM. The experimentation and beginnings of social connection and the desire to create a more perfect away message. Livejournal groups and blogging sites increased the desire to create online communities. I spent a lot of time connecting with like minded niche groups through web forums and dedicated websites/chat rooms continued through the mid 2000’s. Being on the college only facebook was a fascinating time and watching the role of social media evolve during my 20s from being an active participate to slowly fading back as free time decreased. I remember flashing custom firmware on my motorola razr to increase some of the connected abilities of the OS. I would say highest activity online was during my teens and college years. After I started working mobile technology was starting to become more prevalent and the static and passive communication channels (forums, away messages) were shifted to the more active ones we have today in the ever connected state.

The “away message” as a concept is really interesting as we circle back to an always connected society. Twitter is the ultimate in “current status message” with push notifications blasting us at every available waking hours. Find my Friends, shared calendars, foursquare, keep us connected and sharing at every available moment. We are never really AFK anymore.

With Mudita I like the prospect of going AFK again. I like to think that new products and services will grow fill the void/opportunity that gets created by the growing digital detox crowd. Since about 2015 my phone has been in Silent mode and my voicemail basically says “please email me instead.”

The hope was that passive computing would have arrived already but since passive computing cannot survive on an ad-based model (active eyeballs or ears) there is essentially zero incentive for the large tech companies to push resources this way.

Phone numbers are an archaic analog to represent connection that we have failed to move away from due to the power of the telecoms and ancient switches on their backend that connects everyone. There are too many different paradigms for connection and that is why we are harassed with non-stop notifications. A unified connector that contains voice (call, message), video (call, message), text (both short form - text message/chat, and long form - email/blog), across multiple devices would be the idealized connected future. This gives the individual the ability to control and use computing as each individual requires.