Thanks for that news! What is the manual approach to updating Mudita Center? I was excited to update it today, given that I have a Mudita Harmony, but I keep getting this (on a Windows 10 computer): 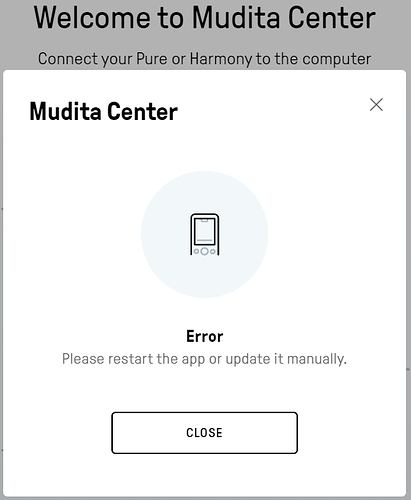 Just a first impression on the update process itself when using Windows 10 Pro. Mudita Pure was on v1.2.0 and Mudita Center on v1.3.0. It was a bit scary but it worked out at the end.

The Mudita Center couldn’t auto update itself. It would download the update but when applying it would bring an “Error” saying “Please restart the app or update manually.”. Unfortunately, there was no error code reference. Restarting the app didn’t trigger anything so I downloaded the setup myself. Note, Windows will warn you about this downloaded file and ask if you want to run it anyway. If you confirm or unblock its execution in its file properties, the setup will start. I just installed the new version, there was no need to uninstall the present one.

Now, the scary part. It started normal when having the Mudita Pure plugged to the Computer the Mudita Center noted it, asked for its unlock code and then indicated that there is a new version available. I chose to download and apply it right away. But, then after a few moments the Mudita Pure froze, the time didn’t change anymore. Not sure if expected during the process. After about 10 minutes the Mudita Center stated that the update failed. I got the option offered to have the logs sent which I did, not knowing what came next … Since there was no indication that the update was started on the phone I decided try it another time, but first reboot the Mudita Pure or do a factory reset. I unplugged the USB cable pressed the button right to the 4-way navigation and then the Mudita Pure rebooted now telling “Update in progress… Please do not unplug your phone”. Ha, ha. I was so astonished I just connected it with the USB cable again while the Mudita Center was still running. Still, no change on either side. While dealing with my emotions I got a happy surprise some moments later: The Mudita Pure reported that it applied the update successfully.

Sorry. Hope my writing isn’t too much.

Had the same issue.

You need to download the setup from Mudita site Where do I download Mudita Center? and run it manually. You many need either allow Windows to have it “run anyway” or “unblock” it in its Windows file properties.

You don’t need to uninstall the present version before. Just installing the new one is enough. At least that worked for me.

Same thing with my Harmony. Though, my Harmony must’ve had enough because it rebooted itself and suddenly Windows recognized it as device again

… and it was recognized by Mudita Center too.

After some testing this morning,

This has improved the voice quality, but the overall performance is still very low. I think it has to do with the hardware and not the software. It’s very serviceable now though, I can see people using the device more.

Thank you for the info on the update! I haven’t been using my pure for about a month due to issues with staying connected to the network and jumbled texts. I just downloaded the update and will put my sim back in again to test. Also, thanks for letting us know that there will be another update later this month!

Is this issue still present for you?

@Jose_Briones Thanks for the feedback.

@hummingbird12 Initially, we wanted to release it all together, but we figured the audio issues where too important to hold back on, for another 2-3 wks. This is why we decided to release it now. This will give us a chance to gather some feedback & see if more improvements are needed.

Is this issue still present for you?

Yes, when I launch the Mudita Center (now at latest version) and then, per the instructions on the opening page, connect my Mudita Harmony to my computer, I get the same error message from Microsoft Windows 10.

@kirkmahoneyphd I’m going to ask our devs about this. I recall that someone had this issue previously, and the fix was something really simple.

The procedure for turning Mudita Harmony off and on in case you do not have it hand.

When I tried this the Mudita Center was open and the Mudita Harmony connected by USB and there was no need to skip the initial screen. If it works the software updates the screen automatically.

Otherwise, I’ll root for you that @urszula gets a dev at hand which tells the magic, missing detail to fix the issue

Did you try to turn off and on the Mudita Harmony while it was connected to the Mudita Center?

Thank you for those instructions! I’m glad that they work for you.

Unfortunately, they do not work for me.

My experiences from handling calls after the update do vary. On 2G calls through phone speaker it seemed ok. With headphones attached people complain that they cannot hear me. I need to move mic close to my mouth to make other party understand what I’m speaking (same set used with samsung phone works without such magic). Yesterday I had another phone call which seemed to be using 3G. The other party complained that he can hear me with interruptions like 1 in 3 words. Also the phone got warm and continued to keep my ear warm through the call. I thought it would be good to have an option of disabling 3G and just using 2G.

Hey, I believe you are in the US, correct? If so, what service provider are you using?

Hey where are you located? I’m trying to get my phone to work in the US and haven’t had much luck with finding a carrier.

I’m using T-mobile in the US. Connection is good at times, but it still loses connection off and on. It’s enough for me to switch my sim back out again, unfortunately. Phone sound quality is still about the same after the update as well, although I didn’t have any issues with texts being jumbled. Waiting for the next update to try again.