Feedback from an irate American user

And to top it all off, I knocked it off my night stand onto my carpeted floor (< 1m) and it exploded. Now I have a very expensive paperweight.

Do not buy this product. Would not recommend.

Well, I went and took it apart the rest of the way to figure out why it wasn’t working after I dropped it. Turns out the smaller, secondary ribbon cable from the eink display came disconnected from the mainboard. Given how fiddly that connection is and how fat my fingers are, I’m never getting it back together. Anyways, the whole thing is in pieces on my desk. To the trash it goes!

Sorry to hear your experience. The phone is definitely in need of optimizations for the American market. It only works “reliably” with T-mobile per my testing. And even then, the phone disconnects from the signal half the time. Hope you can get a refund.

@duncancmt We appreciate the feedback. We’re sorry you’re not happy with your device. To be fair, we were upfront with the carrier issues regarding Verizon & AT&T, We initially expected it to work, however, when we did not receive the PTCRB certification (due to our ultra-low SAR antenna), we made this information known in several updates as well as on this forum. When you write that you knocked it down & it exploded- can you please be more specific? Did it shatter into pieces? It’s difficult for me to picture what happened because we actually conducted several drop tests with Mudita Pure (Mudita Pure Videos - #5 by urszula) and we never experienced anything as drastic as you describe.
In our drop tests, the device was dropped three times from a height of 1m- 3m (3.3 - 9.8 feet) with the focus on dropping the phone directly on the most vulnerable point of the phone. Based on previous assessments, it was concluded that the most likely place for the device to sustain damage would be, if it was dropped on the lower left edge. A larger scratch was noticeable on the edge of the device, but the cover did not detach from the body during our drop tests.

Your support document states that this device works with AT&T and Verizon. If you knew that it did not work, why didn’t you update this page? I would not have purchased this device if I had known that I would have no way to use it. Will Pure work on AT&T and Verizon? (USA) : Mudita . That page is the top result for “mudita pure verizon” and “mudita pure at&t” on multiple search engines.

I suppose I was slightly hyperbolic about it “exploding”. It landed with the top edge of the device downwards. One of the retaining tabs of the top of the front plate broke off and the front plate detached all the way down to where it’s attached to the main body with a screw. Once the compressing force of the front plate was removed, the lack of adhesive on the eink display (combined with the jolt of the impact) allowed the display to move upwards towards the top of the device. Because the ribbon cable didn’t have much slack, the force of the upwards movement caused it to detach from the mainboard. The “online/dnd/offline” selector switch also came out, but that was easily replaced. Frankly, I was shocked at the amount of destruction given the relatively short distance of the fall and the soft surface on which it landed.

@duncancmt Thank you for the explanation regarding the phone damage.
Unfortunately, it’s difficult for us to determine what factors cause the damage. Perhaps, it was the force with which it was dropped. Our durability tests were pretty extensive and our phone was designed to survive some drops- as you can see in the test video.
Regarding the Verizon & AT&T coverage, we believe are being transparent.
Our documentation clearly states “unfortunately, they require additional internal certification (which we do not have).” and “due to its ultralow Head SAR antenna build won’t be able to meet those requirements, therefore access could be cut off in the future.” 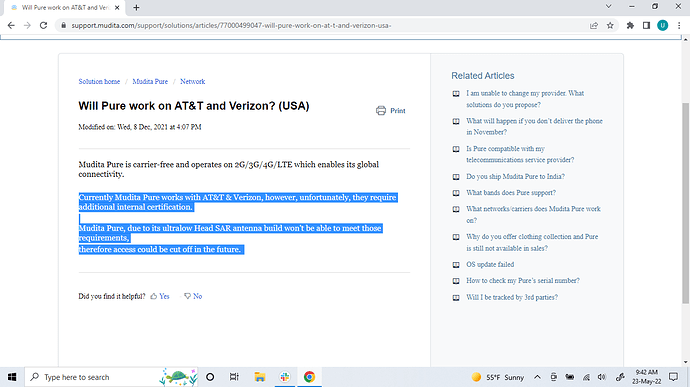 Some of our users reported, as recently as last month, that they were able to get service on AT&T

What is written in our documentation, is correct to the best of our knowledge at the moment.