Discussion: No group text or call on the Mudita Pure

I recently reached out to Mudita with some questions, one of which was about Group Text or Call support. This is the response I got:

Group messages/calls won’t be supported. Although you will receive text messages as separate text messages from those who sent them to the chosen group of people.

I’m a huge fan of Mudita’s manifesto and from what I’ve seen of the phone so far, it is nearly perfect. I also completely understand the commitment to a truly hands-off phone. That said, I feel like group texting and calling (at least a merged three-way call) is a must. The lack of group texting was a major player in killing the similarly-offline Punkt phone.

How do you all feel about this? And to follow up with Mudita staff: Is this something we could expect to see later with a software update?

@textbook_quest Thank you for your input. Currently, Mudita is not planning on supporting group text, however, I can’t predict what updates we will make in the future. That said, on of our users @Ryan_Manheimer suggested a US based alternative: https://groupme.com/en-US/sms Perhaps this could be an option for you.

I appreciate the transparency - it just seems like a pretty big step back.

Unless there is some technical reason why group text is unfeasible that I’m ignorant to?

But group calls (at least three-way calls) were something I could do on my landline 20 years ago! That one hurts.

I guess I’ll remain hopeful. Thanks for the reply,

If we can get SIP to work, it wouldn’t be difficult to get group call functionality through cloud voip providers like Zadarma.com. I’ve been using their service for a couple of years now and am pretty happy with them.

@thinkround This is going over my head — is that like a virtual phone number service? You’d have to have a different phone number specifically for group calls?

I hope group text will be added after release.

@alexlya If you’re based in the US, this could be an alternative: GroupMe SMS https://groupme.com/en-US/sms

I’m not familiar with group call support since it very rare for mobile subscriptions to offer this service. If it was offered I wonder what the phone would need to support…

As for group text, I’m still not getting it, how should it work ideally?

Let’s say Bob, Alice, Charlie and Diana want to start a group chat, how do they do this (on any phone) without MMS and without internet connections? Please explain how it works. Would every message need to be sent to all three others individually? If not then where?This is such a new feature to me, that I’m quite flabbergasted by so many people suggesting it as an essential feature…

Most modern phones (the vast, vast majority) have group texting as an option. Basically when you go to compose a message you can add more names than just a single one. When people respond, the messages all show in the same thread with the contact names next to the message so you can differentiate one from another. 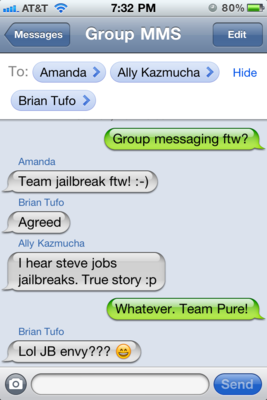 The reason people, like me, are saying it is essential is because it’s been a basic feature with pretty much any phone that can text for the past 10~ years. It’s like group calling — where you can call and talk to multiple people instead of just one-on-one.

It isn’t too different from e-mail chains with multiple people CC’d.

My primary argument for it is that it reduces my text time. A good example: If I am meeting a group of people for dinner, I can simply shoot a single text to my ‘dinner group’ and someone out of the five people will notice it and tell the others. Instead of me having to send a single text to each person. It also provides a much easier way to stay in touch with family members. I can shoot quick updates over to my family. Or I can discuss work with a group of co-workers. Ask if “anyone knows what time we need to show up tomorrow?” easily.

To me a phone, especially a mindful device like the Mudita Pure, should put functionality first. If the phone is ultra functional, it becomes a tool. That is a good thing. The biggest issue with smartphones is how closely tied they become to your identity and happiness — ie. games, notifications, social media, etc. All a phone really needs to do is call and text really well.

And if I really can’t have group text, I at least want group/conference/three-way calling — which has been on phones for literally 50 years — but the Mudita doesn’t support it.

It’s a feature that is not part of the SMS spec. It’s just convenience in today’s modern messaging apps. you create a contact group and if you send it to the group, you send it to all of them. you receive messages in that group as well.

AFAIK only MMS can do this for now, but you’ll get charged for the number of recipients, so one message for each of them. At least where I live MMS are 5 times the cost of an SMS so that’s just not feasible.

There is no way to make groups work as of now. The one linked above is for messages which works differently then SMS. You’d either have to create some “in-house” text format where you append/prepand some stuff in an SMS or just use an alternative like Matrix.

I’ve seen a lot of threads that want group chat. But if I do not miss anything it’s just possible with MMS (expensive!).

On a side note: do you have access to the repository?

I see thank you for the clarification! Now I also know why I was oblivious to this: MMS has never worked on any of my devices and with $1 / message I never felt the need to fix that. Even receiving MMS was annoying as I’d have to login to a website on my laptop to read it.

Thanks, no I don’t have access yet, do you?

Sadly not, I can’t wait though

@olaaaa The GroupMe SMS function is not just an app. It’s actually a way to send group texts through the SMS function. They do have an app, however, those who don’t want to use the app can still send and receive GroupMe messages through SMS (Texting). You just have to use special hashtags.

Oh okay! Thanks for clarification

For another perspective on this.
I’m on dumbphone already. It can send group MMS but I did not know it was group MMS. I thought it was the equivalent of Bcc rather than Cc. I only learned about it way late that the recipients could see each other and sometimes mistakenly reply to each other. That’s pretty awful. I hope that doesn’t happen on the Pure.

I don’t wanna be in any chat groups on mobile. On the computer I have IRC, XMPP MUCs, Matrix and Jitsi.
When I leave the computer I wanna get away from the conversation. If people urgently need to contact me they can contact me directly.

It’s true that there is kind of a spoiled life to be allowed to disconnect. There are professions, or personal relationships, where you need to be on call 24/7 or need to be in these group chats 24/7. For those situations you are going to need a smartphone instead.

Maps is another example. Like, me being able to call up a friend and say “I’m lost, I’m at such-and-such street, there are some trees here, where do I go?” is such a luxury. Not a monetary luxury or class luxury but I’m grateful for having made friends like that and I realize that not everyone has situations like that.

Thank you for the perspective! My counter is that the perfect dumb-phone shouldn’t really be about disconnecting. It should be about making your life easier.

Right now, smartphones are so bogged down with hoops and distractions that are detrimental to mental health and productivity. They are made to be procrastination machines.

Is the concept of a search engine at it’s core flawed? No. In fact, it’s incredibly useful. But it’s the hyper-intelligent, predatory companies behind search engines that make them detrimental.

Take that analogy and apply it to anything else.

Group text/call simplifies your life. You can communicate with multiple people quickly and, in turn, spend less time on your phone.

GPS saves you from printing maps or buying a separate GPS device and allows ridesharing (eco), provides safety for women (and men) who travel alone.

Obviously Mudita isn’t that strict in their no-distraction beliefs considering they are including music (of all things) on the phone. Probably the least functional thing to include. They also discussed GPS as a stretch-goal for their Kickstarter.

To me the perfect phone is a simple tool, that does every utilitarian task a phone could do, and has no games or social media or multimedia. I don’t want it to feel like an extension of my body like smartphones tend to. But it should be a tool that actually helps my life move more smoothly. Otherwise why own one at all?

Disclaimer: I’m not saying Mudita Pure isn’t this device. I’m simply waxing poetic about my dreams. This is far and away the closest device I’ve found to what I’m looking for!

Maybe some of the future Mudita devices are more in line with what you want. There are also efforts to strip down smartphones, less distracting launchers etc, ways to try to prevent you from having more than five apps or whatever.
I use group chat apps like IRC and XMPP while I’m at home and want to communicate with multiple people. I don’t want a group chat in my pocket to be binging and blonging while I’m out. That people can call me, even text me, when they need to get ahold of me specifically, when I’m out, gives me peace of mind and reduces stress. To be part of some group text conversation that, even if it’s just silently something I can constantly check, causes stress. Worst case, it’s a steady stream of not-wholly-relevant text messages that bug me audially. Best case, but still awful, it’s like a news feed of a silent interesting conversation that I’ll always have in the back of my mind and would want to check. Like, I’d be reading a book at the waiting room at the dentist (OMG I daydream of going to the dentist again) and I’d be like… this book is great… wonder if someone has written something in our group chat! and go look there.
Group calls, on the other hand, are just a plain good idea… but isn’t that on the operator/switch level? Am I confused about how group calls work? I thought all phones supported group calls?

The thing about group texts si that you don’t need to be a part of one! I personally use them to easily communicate with my whole family when I’m on a trip. Or to tell a group of people I’m running later for a dinner.

And yeah, Mudita staff has been pretty clear that the phone won’t support any kind of group calling. Which is a shame considering it’s a feature that’s been around for like 50 years