Hi. I’d like to know if this phone has a call record function. It’s very important for me.

Hi @morx, as far as I know, it won’t be possible to record calls.

And is it possible to be in future updates?
Do you thing about this function?

Would it be possible for you to give me some context as to why you might require this function? As someone who never usually records calls, I’d be interested to learn more. I’m not sure if it is being considered for future updates as it might be a privacy concern.

I can say several reasons. My wife is after brain damage. She has problems with memory and speech comprehension. She needs to be able to replay the calls, otherwise she will forget about them or misunderstand them.
For example, I record some conversations with my old parents, they live far away and I have it as a keepsake.
I also record when someone describes to me how to get somewhere so that I can repeat it during the journey. Or when someone describes to me how to do something.
And then, when business offers call me, I record it as evidence. Of course, I inform them in advance in accordance with the law in my country.
I’m sorry for my bad English. Perhaps it is understandable.

Now we use Android phones and app ACR on it.

Thank you so much for sharing this information, that does make a little more sense now as to why such a feature might be required and I do appreciate your honesty. I will pass this on to the team if you don’t mind, so that such a functionality may be considered. However, I can’t make any promises as to whether or not it would be delivered, even as an update.

I’m very sorry to hear about your wife. Your other reasons do make sense too. Also, please don’t worry about English mistakes on the forum, there is no judgement here from me or any other team members, we understand. If the Android device is working well for you, given your current situation, perhaps there are alternative ways to make that device more distraction free.

Hi,
I love the concept behind this phone - I’m very much looking forward to getting my hands on one!
As somebody else who records all calls, it would be a very handy feature to have in a future update - but not essential.

@morx Check out some VoIP service providers local to your country, you could easily configure a third-party solution for this. How it works? Port your number to the VoIP provider (or get a new number, that’s OK too). Any incoming calls now go to the VoIP provider and immediately forwarded to your cell phone as a pass-through. The VoIP provider can record and even transcribe your calls (not all providers do this, so do some research). This will be transparent to everyone involved and you can easily manage your call recordings online. That way you can use Mudita or any other phone. It shouldn’t cost you more than $5-10 USD monthly.

My old Nokia N95 had call recording and even a PBX app. To this day, it’s still one of the best smartphones, imho.

I’m considering buying a Mudita Pure phone and the lack of call recording is one of the things that’s making me a bit unsure. On the one hand, it’s not really a “basic” feature that you would expect from such a phone but on the other hand, as a small business owner, it’s really important to record work calls for those “he said, she said” situations and contrary to advice around VOIP etc., it’s really not that simple. Sure, it’s easy to get a VOIP number and redirect incoming calls to your mobile number while recording them, but what about outbound calls? What about the contacts who are used to using your mobile number? What about the extra costs and time to set it up?

Yes, it’s an extra step, but you can use callback feature to initiate outbound calls over VoIP. And if the mobile number is a central point of contact, I would transfer it to the VoIP provider so the recording can be more seamless, that way you don’t have to inconvenience your contacts in having them update your phone number. Subsequent forwarding other lines to your new mobile number is then straight forward via SIP. However, you’re absolutely right, there are are some inconveniences and tradeoffs. It’s to be expected that extra services and features bring additional costs. If call recording is really a must have and your use case does not allow for a purely SIP (VoIP) device, then the easiest solution might be limited to Android smartphones. Or try to engineer your own phone, it’s very much possible using commodity hardware, open source projects, and maybe a bit of programming.

The only other thing I can think of is to use a headset when you’re taking calls on the Mudita. Surely it will be possible to connect a wired headset via the 3.5 mm jack. To that you would daisy chain a voice recorder (i.e. dictaphone) that is automatically activated when a call initiates, and the conversation would happen via headset. Or you can turn on speakerphone and record that way as well. Yes, it also involves a second device, but it solves the problem of recording calls without building new hardware or software.

The only other thing I can think of is to use a headset when you’re taking calls on the Mudita. Surely it will be possible to connect a wired headset via the 3.5 mm jack. To that you would daisy chain a voice recorder (i.e. dictaphone) that is automatically activated when a call initiates, and the conversation would happen via headset. Or you can turn on speakerphone and record that way as well. Yes, it also involves a second device, but it solves the problem of recording calls without building new hardware or software.

^ These are creative ideas! Here’s a video that demonstrates how to use an external digital recorder with a cellphone’s 3.5 mm jack (or dongle with 3.5 mm jack in the case of the iPhone in the video): 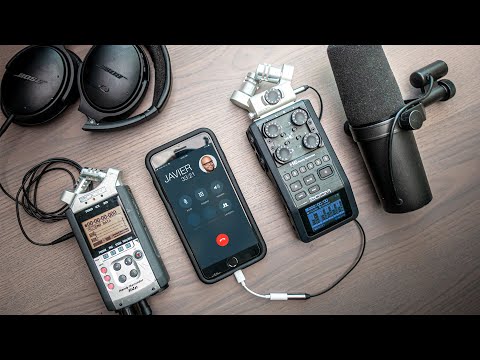